I actually planned to have my children this far apart, and most of the time it works out alright.  The age gap became ever so much larger when The Teenager started to drive.  In the space of 30 minutes I went from indulging The Associate in a game of “I am a kitty take care of me (pictured above)”, to explaining to The Teenager how to drive responsibly.  Surprisingly enough I didn’t cry all over myself and was repeatedly astounded by my calm demeanor.  She chauffeured me all over the winding roads of Lakeview Cemetary, around dead people that she couldn’t kill because, you know, they are already dead. Each turn became a little smoother and her foot more leaden.

stopping for gas on the way home.

We arrive home to The Associate panting at the back door. “Yes, you are a sweet kitty, here is some milk”  “NO MOM! I need you to take my picture so it looks like I am stopped in mid-air!” 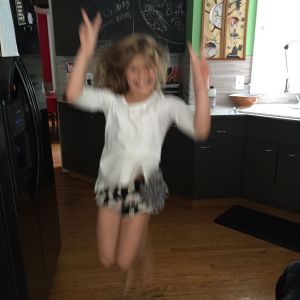 The manual is read and highlighted.  It is full of useless information, but I don’t tell her that.  There is no driver etiquette, or even common sense, so I begin to point these out quite obsessively when we practice.  I go over what I think a young driver should know, but the DMV has very different ideas.  I am all for it being difficult to get a driver’s license, and the questions to be tricky, but two questions she got wrong are utterly ridiculous. They are so bad I woke up thinking about them.

The first question on THE NEW DRIVER TEST that she gets wrong asks.  “If a driver is over 18, who in the car has to wear seat belts?”   My cautious and thoughtful teenager that I have spent 15 years buckling in, over 16 if you count me buckling my giant pregnant belly, answers: Everyone?  Sounds good, safety first, but to her surprise and my horror, this is incorrect.  The correct answer is: Only the people in the front seat.!  Thanks DMV.

The second question on THE NEW DRIVER TEST that she gets wrong asks.   “If a driver under the age 21 gets pulled over for drunk driving how long do they lose their license?  Again, The Teenager reasons, well the driver is drinking underage which is bad and driving under the influence, that’s really dangerous.  Her answer is 2 years. This however is incorrect, and the correct answer is 60 days.  Soooooooo. Let me get this straight…… A person under the age of 21 and over the age of 18 can drive around with people unbuckled in the back seat (kids included), while under the influence of Alcohol that they aren’t even legally allowed to drink yet, AND it is really not a big deal. 60 days and they can get their privileges back.  SERIOUSLY who do I call? Even if this messed up stuff is the law, is it necessary to put it on the NEW DRIVER TEST?? I have 7.5 years to get it changed, who is with me?