Every year we venture up to the Adirondack mountains to be with family.  Every year our pack gets larger, and there always seems to be fewer restrooms, but we always have fun.  One of the things that always makes it so special is Martha’s treasure hunt.  It started approximately 9 years ago we think when there was only three girls in the family.  It began as a magical adventure about cousins, family bonds, and love. Every year Martha diligently creates a story that expounds on these themes. The hunt itself has become such a tradition that the kids begin discussing it weeks before we depart.  In earlier years when there were no teenagers involved the kids donned pirate costumes generously loaned from the collection of Cookie, and stayed in character all day.  This year we are up to five girls and a boy (next year he is definitely going to wear a pirate costume) 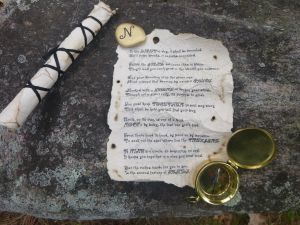 After much preparation the hunt begins. Despite every effort to make sure each year a different child finds the map, my little associate spotted it first.  After the screaming died down they sat down to read the first map. Do you believe Martha used to write this out by hand every year? Thank goodness for fonts and suspension of disbelief.  Rachel read the map this year and when it was dark the magic began in the fire.

The next day they began to find the clues by reading the map and pacing it out with the compass. 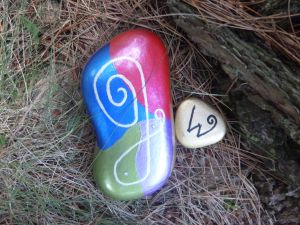 In typical Martha fashion she once again created beautiful clues with each child’s initial to lead the way. I was just informed by my associate that the stone that was marked J, he is the newest addition to our expanding clan was the most important clue because it led to the buried treasure.  There are always goodies wrapped up in the box. This year it was necklaces and bracelets.   After they check out their booty they preform a ritual with the potions to make sure the treasure comes back next year. 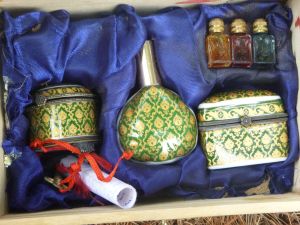 I don’t know how she does it every year, she does have here own associate her awesome husband Steve, but it never fails to be the highlight of the trip.